-No, I said Saxon, as in my Dark Ages Anglo-Saxon Army.

"That's not as exciting.  Unless you like a bunch of dirty men with long strong spears."

Since aaaaaalll the way back in August (as seen in THIS previous post on August 4th) I've been slaving away at making new big battle bases as the old ones just wouldn't do anymore because I am an older, wiser, and generally more fussy wargamer.

With 4 more bases done; I peered up from the frantic work at my hobby desk, waved away the lingering clouds of static grass and flock hanging in the air, rubbed the brown paint off my fingers and face, and discovered---- "Hey, I'm Kinda out of Saxons.  Guess that means the army is done."

Now it is time to see the army in it's new glory and also do an inventory (because I'm not really sure what's in it).  I laid out the army as if I were gonna play Hail Caesar.  It's a Parade!

The entire army consists of 8 bases of armored 'Thegn" types (chainmail) and 10 bases of unarmored 'Ceorl' types.  3 leader types, and 4 groups of skirmishers.  Since a normal unit consists of 10 miniatures I made the small skirmisher units 5 miniatures.  2 of the Thegn bases could count as Huscarls if I wanted, as the base has miniatures all with axes, a steely penetrating gaze (which was hard to paint), and a standard bearer.  Though, I think the army overall is a light on banners and could use more just for the visual appeal.

In Hail Caesar, it's perfectly fine to have loose order skirmishers without a base and just little blobs.  Other rule sets that I also want to use will want these on bases as well.  The plan is to use a standard 10 man base with the 5 skirmishy miniatures and 5 blanks to cover to left over holes. 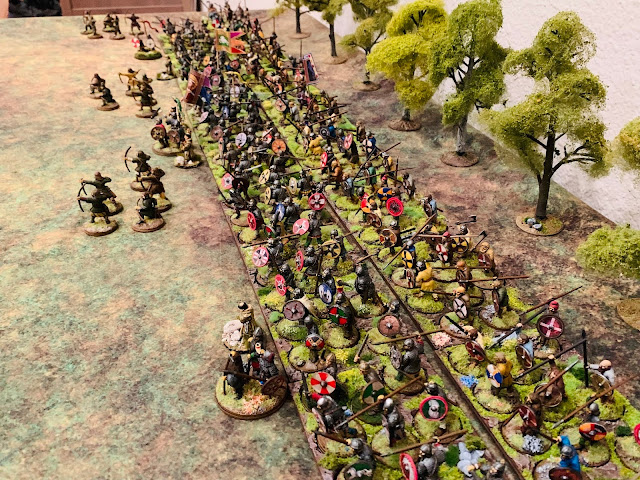 The priest miniatures are just for show because I have them.  Besides, no self respecting defender of the christain faith would take to the field without a few to nag at him.   Though in actual HC games they will serve as markers for special rules and re-rolls. 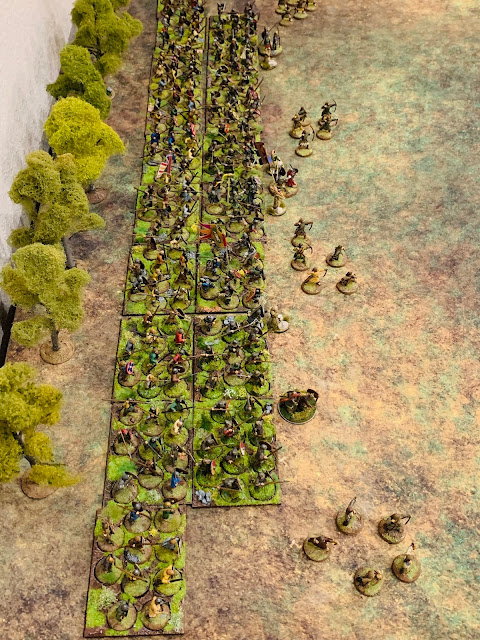 I'm very pleased with the overall appearance of the army.  On a side note; I found it difficult to photograph so many miniatures so I'm not sure I pulled it off.

I did say "Kinda"

Just to be super clear: I haven't been painting miniatures.  All those Dark Ages Saxons were previously painted and I'm just sticking them on the new fangled base.  IN FACT, looking back at previous posts shows that I haven't painted ANY miniatures at all this year.  I find that interesting.  I've painted other stuff of course; one cannot completely escape the endless chore of painting in miniature wargaming.  Just like doing dishes or laundry, and I thought getting married would free me of those chores....

While 18 units is suitable massive, I actually envision the army being closer to 24 bases, because that's how many I bought for them.  And there is a still a handful of Saxons left over.

Obviously not enough miniatures to fill a base, so these remainders will be just stored loosely all on their lonesome, and who knows what trouble they will get into?  Staying up late, drinking hard cider, and looking at naughty things on the internet.  Websites like "dark age beauties" or ever worse: hobby blogs.

A Conflict of Desires

I have a strong desire to actually finish something.  Can you imagine having a wargaming project actually finished?  So on one hand I want to start painting up Saxon miniatures to 'complete' the army or at the very least so that every Saxon is on a new ultra pretty big battle base.  On the other hand I have a desire to keep churning out big battle bases but now for the Viking Army

When both armies are on the bases then some mass battle games can take place.  I got some things in mind I want to do.

To make up my mind on what to do next, I'll play that game where you answer a bunch of rapid fire questions of 'This versus That' and you answer without thinking too much to arrive at your true desire...

Roses or Daises?  Ahhh, I'm a man, all flowers look the same

Cats or Dogs?  Neither

Hamburger or Taco?   Taco (that one was actually hard to answer)

Tattoos or Piercings?   Well I still have all my tattoos but I took out all my piercings years ago...

AH-HA!  Bases it is then.  One can't argue with a modern psychological technique that I read in a Cosmo magazine.

Till next time.  Thanks for reading.  Comments appreciated.