Has It Been So Long?

According to my blog, it's been about a year since I posted any ships from the Age of Sail project.  I'm sure by now I've lost my ship adventuring loving audience.  Maybe it's time to take them back by a storm at sea!

Here we have a named ship for the British, the 80 gun HMS Caesar, and some nameless wretch of a 76 for the French.  As it has been my habit, I make these ships in pairs.

This is a LINKY-LINK to BW's post of the HMS Caesar.  He did a smashing job and I believe it's the same Langton model.  Take a look at the other ships too because you know you want to...I'll be here when you get back.

And while I am highlighting people with more talent than myself; Here's another CLICKY-Click to Vol's blog and his excellent ships.  I could of swore he had a post on the Caesar but I couldn't find it.

But now to dash you back to reality.  Here is my Caesar.

Next up is this French 76.  However, I don't have any rules that really differentiate between a 76 and 74, so really it'll just be another 74.  This isn't any particular ship so it's got no name for the present. 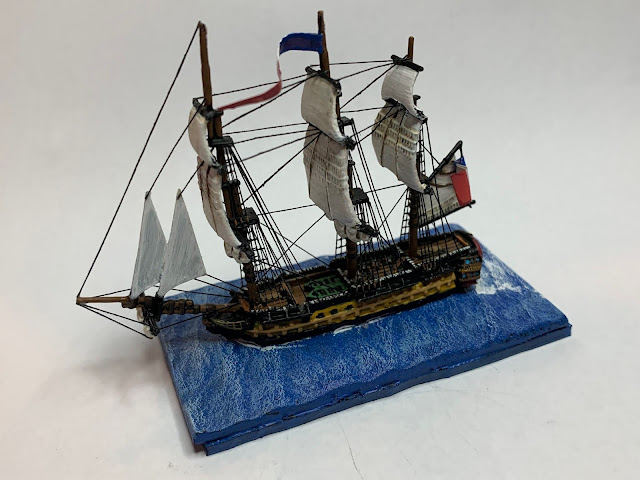 The Immediate Future is Floating on the Ocean.

So, for the moment let’s pretend that the Kublacon Convention at the end of May is not going to be cancelled due to the virus.  We shall see.   At the convention  I have signed up to host some Age of Sail games because I wanted to run games because I enjoy such things, but wanted to make it easy on myself.  It’s NO PROBLEM to plunk down the sea mat and some awesome looking squadrons, plus it’ll be easy to transport.  This won’t be anything Trafalgar-ish, just around 7-10 ships per side.  Like I said, no problem.

But there’s a problem; I don’t have that many ships.

What I have is 5 ships per side, that’s including these two new ones.  Time to get to work.  Nothing spurs productivity like a deadline.  For the foreseeable future, I’ll be a Ship Making Machine.

Waiting in the shipyard are 5 ships, and I’m gonna try to get them all done in time for the convention.  It is a little over 2 months away so there should be plenty of time (in theory).  Maybe if there’s an excess of hobby time and these get done ahead of schedule, I’ll start in on some extras like super cool broadside markers.  Or of course I could just order a few more ships.
But time is a wastin'!  What am I doing just sitting around blogging.

Maybe it’ll go pretty fast, the basic parts of the ships do go together pretty quickly.
So if you need me, I’ll be out to sea. So....

Sea you next time!
Knot if I don’t see you Schooner!
That’s a really bad pun, I’m such a Nautiboy.  But really I just gave in to the Pier Pressure.

I'm Shore that I have you Tide up in laughter. (last one I promise)

On a Serious Note

It's a surreal time right now. Take care of yourselves and your families.