Last weekend I went to Midsummer Conquest.  This is a small local con and it's initial year.
I do my best to support local conventions, basically in the idea that if I support them they'll continue to exist and maybe grow larger and I'll benefit from having wargaming conventions within an hour drive away.  I was only able to go Friday afternoon / night and all day Saturday so I missed Sunday.

I took Friday off to hang out with the family in the morning before vanishing for a day and a half.
I arrived around 1 or 2, said hello to people I knew and began set up for my ACW game that began at 4:00, called "The Mountain Pass" (or some such).  A fictional scenario where the Union is trying to push off the Confederates on a ridge in order to open up the pass for the rest of the army...

Also going on at the same time were a zombie game and What a Tanker.  Each game had a few players but no one was full.  I got one player, Mr. HL who often plays in my ACW games.  1 player was fine with me because it meant that I could play.  : )

Also, I knew it was going to be a small convention so all the games that I hosted were small 2 versus 2 affairs that could be 1 vs 1.  For example: in this game the CSA had 2 medium sized brigades of 3-4 regiments.  A player could control 1 brigade or both without much more effort.

So HL took the CSA and I took the glorious USA.  No detailed ARR but some photos with some pithy captions.. 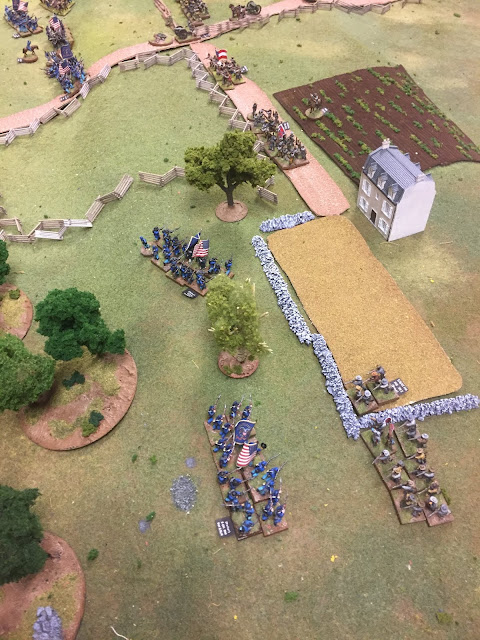 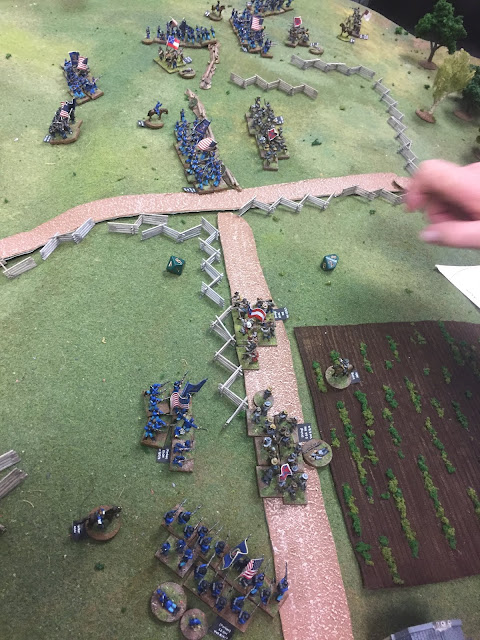 One thing that was super convenient; I got to leave all my ACW stuff overnight in the locked room so I didn't have to transport it twice.  Especially as I was gonna be back first thing in the morning..

Back early the next morning the second game that I was running at 10 AM: more ACW.  This time it was the "Caldwell Clears the Wheat Field" (or fails to do so in this case).  This is one of my favorite historical scenarios.   There were naturally more games going on this morning, so the players were spread out some but I fish hooked two of them:  Mr HL again and Mr. C(last name unknown).   Mr C took the CSA while Mr HL and I took the USA.

Again, no detailed AAR but pics and captions...

(I like that series of 4 pics, where the Union just advance from right to left...)

That game played faster than I remembered, so done by 1 and cleaned up in time to play a few more hours of What a Tanker.

What a Tanker is everywhere I look these days so I was cool to finally play it and the internet is correct: it's fun and easy, if not a little too simplistic.  It reminds a little bit of the Songs of (whatever the genre)  activation mechanics and definitely tops out at a certain number of tanks / players. 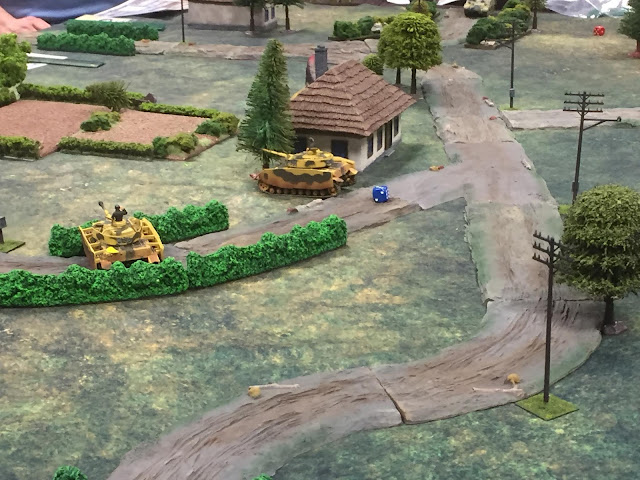 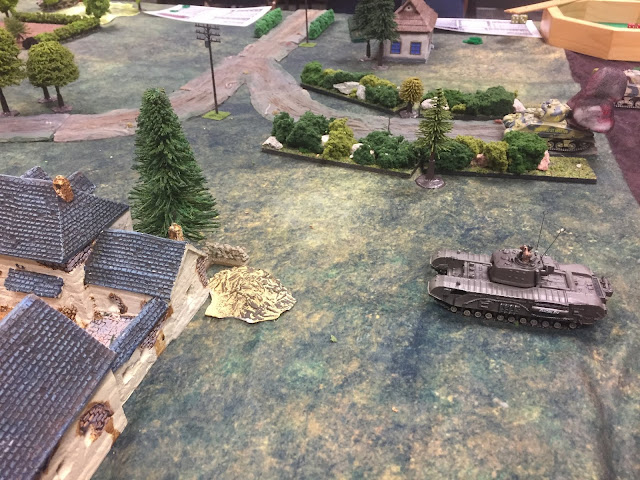 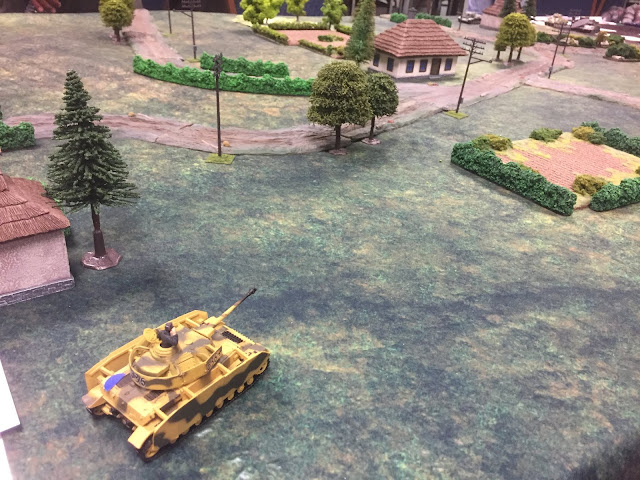 When WaT was over, it was early Saturday evening (or late afternoon, depending on how you see things).  There was something of a gap in the schedule, as nothing was really happening until 7 PM.


Luckily for me, I had the forethought of bringing my Age of Sail ships with me.  So I quickly set up a game of Post Captain for anyone who wanted to play.  A quick scenario where 3 French SOLs take on 2 British SOLs.  Each player got 1 ship. 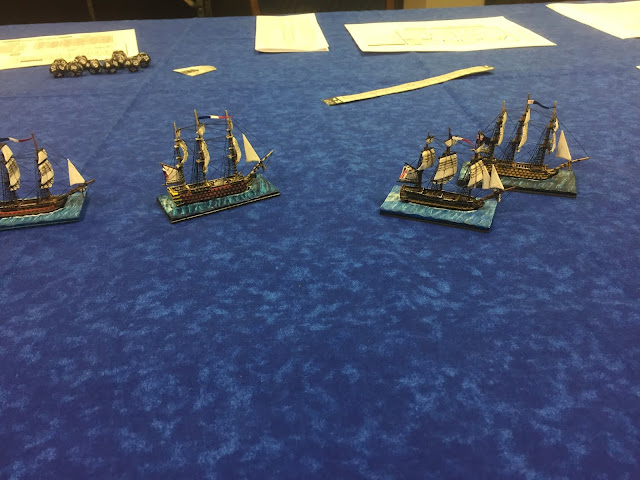 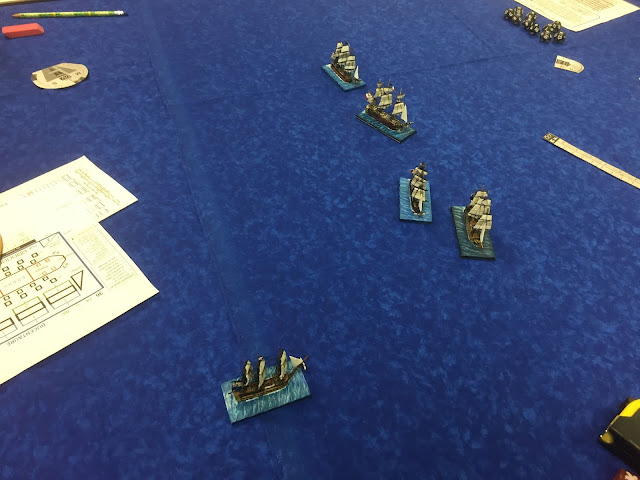 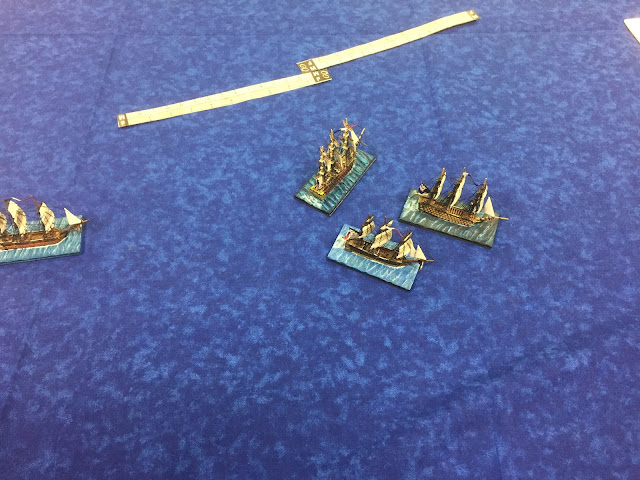 Everyone enjoyed PC, even though I was more rusty at the rules than I thought I would be, so kinda muddled it.  We played for about 2.5 hours and got in about 8 turns, with my ship taking the worse of the damage because I sailed my French 3rd rate out ahead of the formation and took on both of the British.  After my ship struck with only moderate damage but a poor command check, the game ran a little smoother.  It was my first time presenting PC at a con and it went well enough.  So I'll be doing that again in the future. 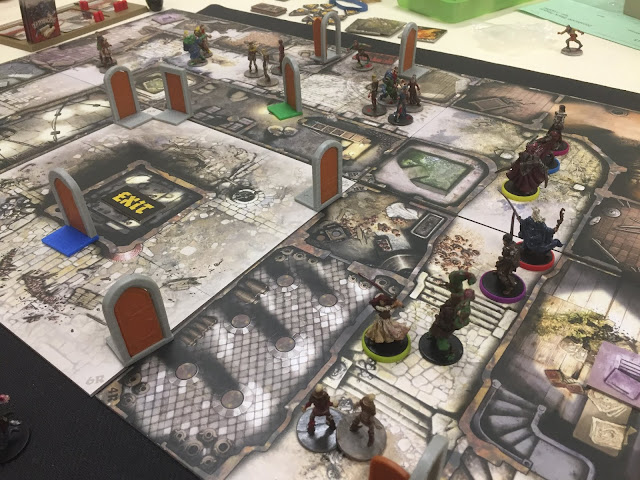 Lastly the end the night, I joined a game of Zombicide Black Plague.  A cooperative game set in some sort of high medieval fantasy setting infested with zombies.  I've never really heard of it before, I played the game mainly because I wasn't ready to go home yet and end my day of gaming and I was tired of miniature games.  besides, I like boardgames.  But the game was actually really fun, played well, good mechanics, and we won!  the host said that the players win about 1 in 4 times.  Of course, that doesn't take into account that we were all natural born zombie killers.

Venue:
The venue of McCellan Center was very nice, easy to get to, easy parking, clean, etc..  I didn't stay in a hotel but commuted from home.  There was some limited food available that I couldn't eat due to my diet restrictions but others seemed well-feed enough, and there were fast food restaurants within driving distance.  All the activities were basically assigned their own room (like there was a miniature wargames room, a board game room, a roleplaying room, etc. and all the rooms were big) so sometimes you felt a little isolated from the rest of the con, but on the plus side it was never crowded and I didn't have to shout.  Plus Friday night I was able to leave my stuff in the locked room for Saturday morning, which was super convenient.

Size:
No lie it was a small convention but I was well aware of that going in.  I have no idea of numbers and spent almost all my time in the miniature wargames room so I have no idea if the other rooms were packed or not.  For miniatare wargames: I won't say there were a lot of games going on but I will say there was always something going on (if that makes sense).   There were some cancellations.  I don't think any game had a full set of players.  All games did look nice and fun.


For myself, I had a great time for my day and a half of fun.  I'll be back next year. 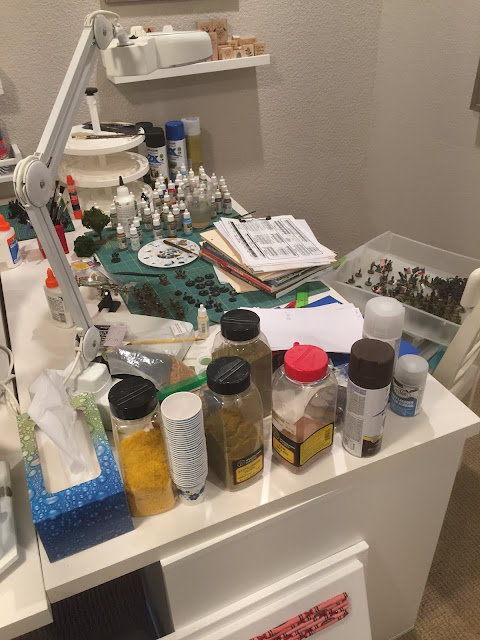 After all that gaming excitement the last 2 weeks, I need to re-organize my stuff.  I'm a mess.


Thanks for reading, comments appreciated.